Remember when you received mail that you actually wanted? Mail that wasn’t just advertisements for crappy vinyl siding, custom blinds and low-interest credit cards? When you opened your mailbox and it was full of fun things like vacation postcards from relatives, letters from pen-pals, or a freshly developed roll of 24 Kodak photos displaying people with their heads cropped out?

Yep, those were the days.

Those were actually the exact days I was dreaming of when we first bought the Retro Ranch and I discovered that it came with the original 1965 galvanized steel mailbox crafted by Leigh Building Products and approved by the Postmaster General himself.

It even had the original Day-n-Night reflective name plate– which, incidentally, the same company has been making continuously since 1949, if you can believe that.

Neither Snow, Nor Rain, Nor Sleet, Nor Theft…

Yes sir, I had some swell retro-restoration dreams for this amazing mailbox. It was sun-bleached, rusty, covered in algae, and the signal flag was barely hanging on. The wrought iron post (with curly-cue designs!) also pivoted at an awkward angle, likely from someone backing their Oldsmobile Toronado into it one too many times. But it was a midcentury original and that was certainly good enough for me.

Until we had our mail stolen right out of it only 6 weeks into our Retro Ranch residency.

This is when we decided to go boldly into the 21st century and have a secure Fort Knox Mailbox installed to prevent further theft. But that didn’t deter me from bringing this original mailbox back to its glory days and giving it a well-deserved second life elsewhere. So into the garage it went.

They Sell! They Satisfy! They Pay You Dividends!

Just one of the many promotional taglines of Leigh Building Products, in Coopersville, MI. This was back in the days when companies included an actual photo of their modern, American manufacturing facility in their glossy brochure, inviting consumers to visit and receive a “most cordial welcome.”

You’ll never see Walmart do that.

Leigh Building Products specialized in manufacturing every metal accessory a midcentury homeowner could possibly want: mailboxes, awnings, shutters, vents, flower boxes, laundry chutes, towel bars, and even a swanky, recessed shoe rack that I wish was still on the market today, because I totally need it. 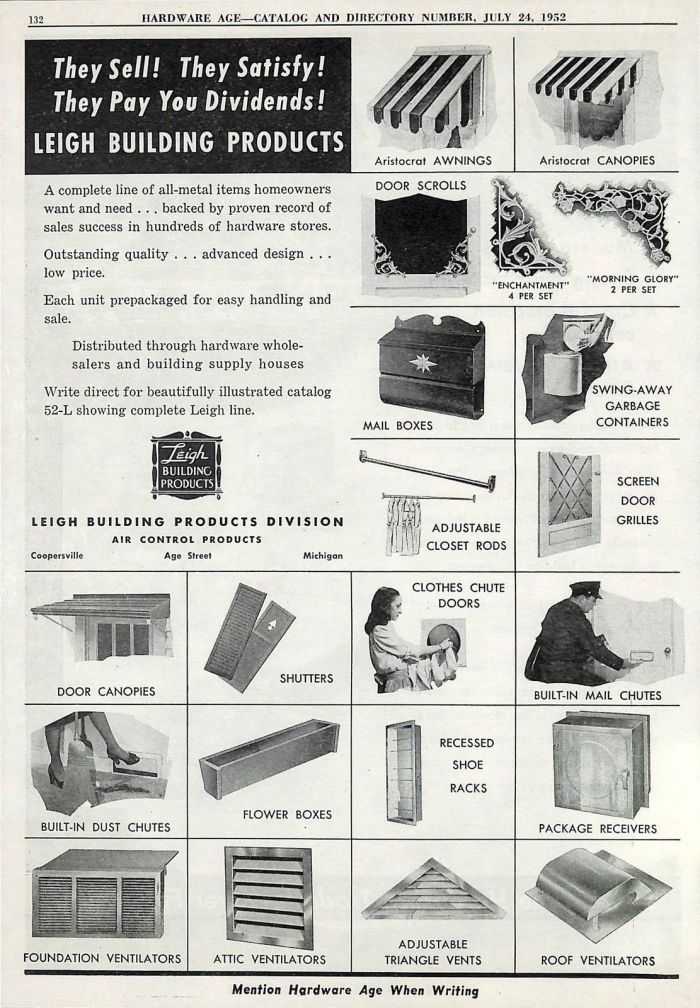 There also were several midcentury resellers like Sears and Montgomery Ward that carried these fancy residential mailboxes, each offering unique features like “reflective light-up beads” and “phosphatized stands” –whatever the heck those were.

And for those who missed the mod-mailbox boat in the 50’s and 60’s, there is now a great little company called ModBox in Raleigh, NC that makes some amazing reproductions.

Fast-forward two and a half years and about a thousand house projects later. It was finally time to give this rusty old mailbox its shiny new life. We scraped, sanded, primed, taped and painted this lil’ retro beauty, effectively showing off its de-luxe lines with a new and improved midcentury color combination. What a swell design!

We debated on where to place it, as it was pure kitsch now and served no actual postal purpose. But even so, it still needed a home that was fitting and proper. Neighbors told us the original owner of our home was meticulous about the property, and, even at 94, normally spent more time in the gardening shed than in the house.

So with that historical knowledge, we placed the newly refurbished mailbox next to the shed and reattached the original owner’s name plate as our dedication to his 50 years of care for this property. 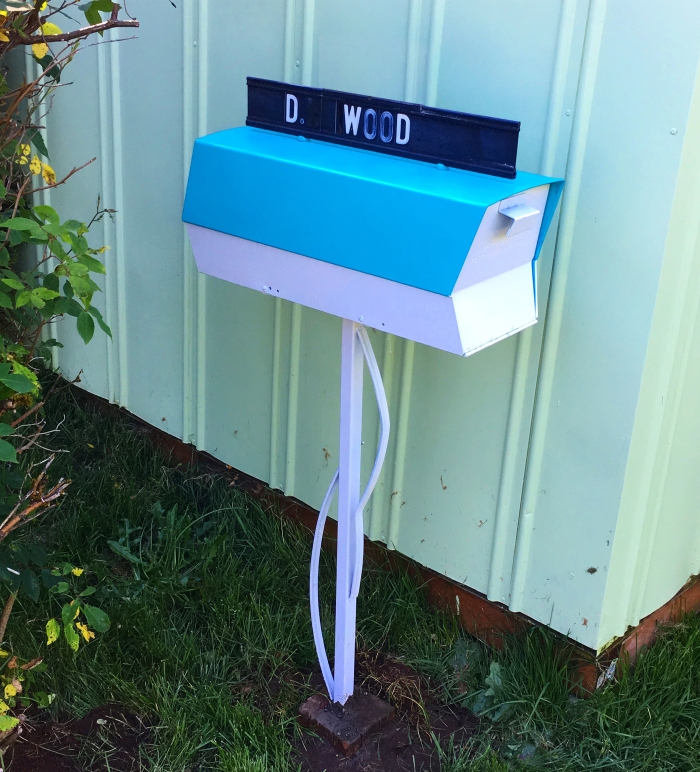 And every so often, after mowing the yard or pruning the bushes, I pop open the mailbox door just to see if he has any postcards from Uncle Elmer or Great Aunt Clara. Because hey, when you breathe new life into something and bring it back from the dead, you never know what else might come with it.